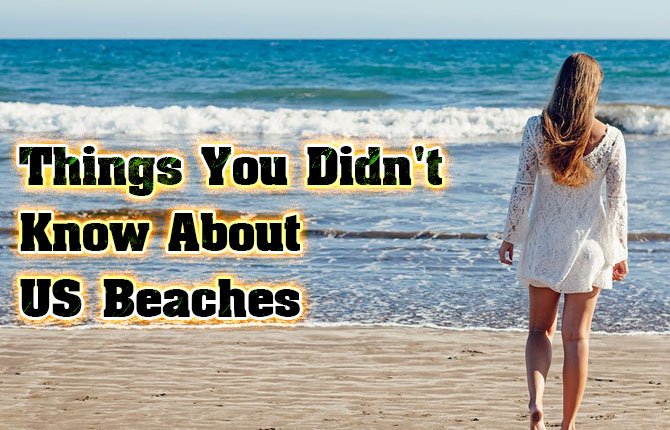 With its endless coastlines, the United States obviously has lots of beautiful beaches. Here are some amazing US beach facts! The longest coastline in the US is located in Alaska, not surprisingly. The biggest US state boasts 33,904 miles of shoreline. With 8,436 miles of mostly white-sand coast, Florida has the second longest shoreline after Alaska’s. Florida is also the only US state that’s nearest to the equator, which is the reason for its year-round warm temperatures — always a great reason to go to the beach! A “beach” technically means the part of a shore of an ocean, sea, large river or a lake, washed by waves or tides. Whenever people think of beaches, they only think of the sea’s coastline. But Chicago’s Lake Michigan (one of the five Great Lakes) provides an excellent beach destination for the Midwesterners. It’s not really surprising that America has a number beaches where clothing is an option. Over 22 states have nude beaches, with the top ones including Baker Beach in San Francisco, California, Black’s Beach in San Diego, California, Hippie Hollow near Austin, Texas and Gunnison Beach in New Jersey. Surfing was invented way back in the 19th century and used to be one of the pleasurable pursuits by the Hawaiian royalty. However, it was only in the 20th century where the sport became more widespread. Duke Kahanamoku, one of surfing’s pioneers, was responsible for popularizing the sport. Revere Beach in Massachusetts is touted to be the first and the oldest public beach in the US, having been established in 1895. It is located five miles north of Boston. The Guinness Book of World Records listed the world’s tallest sandcastle ever built, and it’s in Miami Beach, Florida. It measured 45 feet and 10.25 inches (13.97 meters) tall!

It was created by Ted Siebert, who worked for the Sand Sculpture Company, and a 19-member crew on behalf of Turkish Airlines, in October 2015. According to a recent survey, at least 44% of all Americans are planning for a vacation at the beach. Miami Beach in Florida should be the best beach for sightseeing — that is, sightseeing of celebrities! A lot of showbiz stars hit the Miami Beach every day, probably because of its close proximity to the two other famous Florida beaches, the South Beach and the more affluent Palm Beach. You can only find almost all the phenomenal colored sand beaches only in Hawaii. While Hawaii is the surfing pioneer, California made the sport more popular, thanks to the music of the “surf rock” acts like the Beach Boys and Jan and Dean during the 60s. California is the home of the many popular beaches in the US like the Huntington Beach, Half Moon Bay Beach, Manhattan Beach, Main Beach, Santa Monica Beach, Mission beach, and many others.