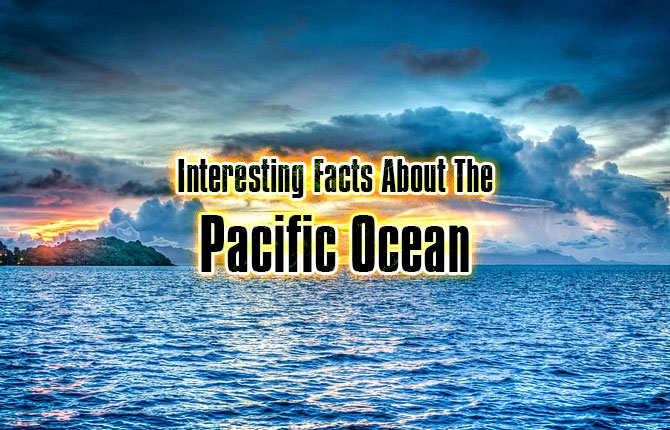 Most people only know the Pacific Ocean as the largest, widest ocean on the planet. However, there are several more interesting facts on this huge body of water. Knowing more about the features, history, and unique aspects of the Pacific would enhance our understanding of it. We can hence enjoy its scenery more and also plan out informed trips in order to experience it better.

We’ve collected a few of the most interesting facts about the Pacific Ocean in order to start you off on this path. Read on to find out more about the biggest ocean we have: The meaning of the word “Pacific” is pretty self-explanatory when you ponder upon it. In a nutshell, the word means “peaceful”. This naming was done by Ferdinand Magellan, a Portuguese explorer. As history students would know, the Portuguese and Dutch were among the pioneers in exploring the rest of the world and colonizing certain parts of it.

When he saw the Pacific Ocean, Magellan referred to the waters as being “mar pacifico”. This is Portuguese for “peaceful sea”. This means that he must have seen a calm and peaceful side of the ocean. However, the name is considered to be ironic now that we know more about the ocean and its features. These include the Pacific Ring of Fire, which has given us many volcanic eruptions, tsunamis, and tropical storms.

The Pacific Ring of Fire is worth exploring further here. This is located in the Pacific Ocean Basin and contains about three-quarters of the world’s total volcanoes. The volcanoes are located along the edge of the basin, hence forming a sort of ring. The name also comes from this formation.

These volcanoes are also active, requiting with frequency and great power. This activity means that most of the natural disasters we face. These include tropical storms, tsunamis, earthquakes, cyclones, and much more.

The most horrific eruption within the Pacific Ring of Fire was in 1883 on the island of Krakatoa. This took place in 1883 when it killed about 36,380 people.

Not only is the Pacific Ocean the biggest one we have, but it’s also the deepest. Its surface area is around 169,479,000 square km or 65,436,200 sq miles. This means it covers almost a third, or 30 percent of our planet’s surface. Since the earth is about 29% land and 71% water, this means that the Pacific Ocean is more than the total land mass combined.

With regards to depth, this oceans is about 3,800 meters or 12,467.19 feet deep. This makes it the deepest water body in the world. Much of the ocean bed here remains unexplored, so we don’t know how many undiscovered species of aquatic animals might be down there.

Despite its huge size, the Pacific Ocean was actually the last one to be discovered by European explorers. From this area, the first person to discover this ocean is believed to be Balboa, a Spanish explorer. This discovery is reported to be in 1513, on September 25th. The Pacific Ocean contains a number of islands as well as volcanoes, though the volcanoes far outnumber them. There are an estimated million volcanoes in this ocean, while there are about 25,000 islands. This is still a high number, with most of the island located south of the Equator and in the Southern Pacific area.

These islands are sometimes grouped together close enough to form a whole country. Indonesia is the prime example of this phenomenon, with about 17,508 islands. The Philippines has more than 7,000 islands. Japan is also known as an island nation, made up of about 3,000 islands.

When islands are closely scattered, we call them archipelagos. The Pacific Ocean has more archipelagos than any other ocean or sea. Most of the famous, scenic archipelagos are found within the Pacific Ocean areas. We’ve mentioned some of these countries in the previous point. The biggest one of these is Indonesia, which is also the largest Muslim-majority country.

Other archipelago countries include New Zealand and Fiji. Hawaii, though now technically an America state, is also an isolated volcanic archipelago. Volcanoes make an appearance here again, with many of the islands actually formed by volcanic activity. This is also why we can find beaches with black sand in the Hawaiian areas.

The most well-known and striking examples of atolls are those located in the Maldives, the Bikini Atoll, and the Tubbataha Reef. These are actually the result of underwater volcanic activity, which results in seamounts. When the lava cools in the water, islands and atolls are created.

With the sheer size of the Pacific Ocean, we can expect it to be teeming with marine life. At one point in time, this was the case. However, human activities (legal and illegal) have put many marine species in danger of extinction.

These activities are usually overfishing, excessive hunting, or pollution through garbage and oil spills. These have served to kill off most of many species or make them unable to breed further. Careless lifestyles and corporate activity have also led to climate change, which has also changed the surroundings many aquatic animals. since they’re not used to these new habitats, many species are hence quickly dying off.

The endangered species in the Pacific Ocean include seals, sea turtles, sea otters, whales, manatees, and dugongs. The last of these is the only sea mammal that’s also a herbivore.  If we’re not careful, we may end up losing many unique species like these in the near future.

Humans are getting about 60% of their fish plus seafood from this ocean as well, so we need to preserve it all the more. Otherwise, our tuna, salmon, snapper, herring, shellfish, and many other choices might be seriously diminished.

While the Pacific Ocean wasn’t discovered by Europe until 1521, it was still heavily used for human migration before that. There’s even evidence that humans had used these waters to migrate at least as far back as 3000 BC.

While we may not notice it, the Pacific Ocean is slowly shrinking. This is due to the tectonic plates moving, resulting in around half or 0.52 kilometers lost every year. This is around 1,600 feet. In contrast, though, the Atlantic Ocean is expanding by around the same measurements per year.

Now that we know so much more about the Pacific Ocean, it’s time to spread the work. Sharing this knowledge with everyone we know would help to create awareness of the beauty and usefulness of this ocean. Hopefully, this would result in some concrete steps towards cleaning up the waters of the earth and making them fit for all sorts of marine life again.