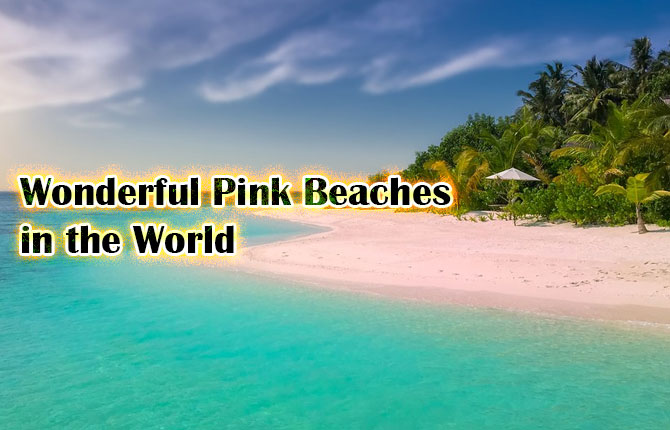 Beaches are a beautiful sight in general, but they’re even more breathtaking when the sands have a naturally unique color. Many may think of beaches as having only yellow or white sand, but there are actually several colors of beach sand. Depending on the minerals and organisms inside it, sand on the beach could be black, pink, red, green, and many other shades. However, pink beaches are relatively rare and make for especially gorgeous pictures!  These are formed when the small red organisms in seashells or coral die and are washed up on the shore. They’ve also been crushed to a powder by the pressure of the water and waves, hence resulted in pink-dyed sand. We’ve listed some examples of these exotic beaches below:

Elafonisi is an island located close on the south of another island in Crete, Greece. It’s also the administrative part of Crete. The fairly rocky beaches here are lined with gorgeous pink sands. It’s one of the lesser-known areas in the world that are blessed with incredible beauty.

If you go at just the right time of the year, the waters are shallow enough to walk to the island from the opposite shore. While there might be rocky areas, most of the pink beach here is a great playground for kids and groups of friends. There are also many amenities such as a parking lot and bathrooms. However, the wildflowers and unique rock formation give off the feeling of a remote oasis. The name of the beach says it all — “Spiaggia Rosa” (“pink beach”), which is located on the island of Budelli in the Maddalena archipelago, in northern Sardinia, Italy. It presents a picturesque experience, often named as the most beautiful pink beach on the globe.

There are several micro-organisms that have led to this pink shade, including Foraminifera. The sand itself is of a fine texture. One unusual addition to this area is that the granite rocks that surround it are also pink. Indonesia is an archipelago nation that’s made up of around 17,508 islands. Komodo Island is one of these and home to one of the world’s diverse fauna — including the Komodo dragon. Not only that, some of its beaches feature soft, pink sands.

The Komodo dragon is the main claim to fame for this island, but it’s also known for its stretches of pink-tinted sands. The view is made more majestic by the rocky cliff, while we can see coral beneath the surface of the water. This coral is partly responsible for the beautiful and unique shade of the sands. Located within the North Atlantic Ocean, Bermuda is known as an island paradise and a tourist destination. No wonder it has a lot of stunning islands, a lot of them with pink sands like the Horseshoe Bay. This is perhaps Bermuda’s most famous beach.

The name of ‘Horseshoe’ probably arises from the fact that the beach has a sort of crescent shape. The pink is created by the powdered corals and pink shells that wash up on the shore. Adding to the lovely effect are the turquoise waters, which provide a stunning contrast. This place is hence a favorite walking spot for couples, families, and even lone individuals. Forget Boracay… you may want to go to the Philippines’ only pink sand beach for a change! The Pink Beach of Great Santa Cruz Island is an island in the city of Zamboanga which is famous for its pink coralline sand beaches. It was formed by the pulverized red organ pipe corals that were washed onto the shore.

The pink color here comes from a crushed form of organ pipe coral that’s originally red in color. Surf erosion through the centuries has led to the coral getting mixed into the sand, thus resulting in the unusual pink hue. Aside from Elafonisi Beach, there’s another pink sand beach in Crete, Greece — the Balos Lagoon Beach. It is located in Gramvousa, an uninhabited island. This is a completely virgin island, which means you might have the glorious pink-sand beaches in Balos Lagoon all to yourself on a day trip.

The waters here are shallow and warm, offering an experience that’s almost otherworldly. There are also cliffs and rock around the lagoon, creating a secluded effect. The little Caribbean island that forms part of the country of Antigua and Barbuda offers a lot of beautiful, exotic, and paradise-like locations. Both islands lie between the Atlantic Ocean and the Caribbean Sea. One of them, Barbuda, is an unending stretch of conch shell-colored sand beaches, which are also exceptionally wide.

Barbuda’s western shore is mostly a complete stretch of beach. While it may not be all pink, there are some belts of pink sand. There’s a whole Pink Beach located in the southwestern part of that region, which alternates the pink color with the occasional white patch. This remote beach in the Indonesian island of Lombok features pink sands, which are the product of crushed coral reefs that got mixed with sand during ages of sand erosion. Lombok is located in West Nusa Tenggara, which is a component within the Lesser Sunda Islands.

The Tangsi or Pink Beach is also distinguishable from most other beaches you can find in Indonesia or even all over the world.  This is due to its pink color, which comes from the coral reefs in the area. Overall, this beach is one of the remote options on this list, as you’d get fewer crowds here. The panoramic view is worth experiencing and capturing for posterity. Bonaire is an island in the Leeward Antilles (Netherlands Antilles) which lies in the Caribbean Sea. It is a popular tourist destination, especially among divers and snorkelers. There are also several other water sports that make the island a favorite vacation spot.

Overall, Bonaire itself is considered to have some of the most beautiful sceneries in the whole world. Not only does it boast rich marine life, but Bonaire also has lovely pink sand beaches. This is the result of the crushed foraminifera shells that got washed onto the shore many eons ago. The island forms the ‘B’ of the ABC islands in South America, with Curacao and Aruba representing the other letters. The Harbor Island is an administrative district in the Bahamas which lies in the Atlantic Ocean. It is probably the most famous pink beach on earth as it boasts three miles of rose-colored sand beaches. The shade comes from the shells of foraminifera, bright pink organisms which are abundant on the island.

Just a single gram of the sediment here might have hundreds of living organisms along with even more non-living shells. With so much pink imbibed into the sand, it’s no wonder that the beach draws in a large crowd. There are other attractions as well, such as safe water, colonial cottages, and decent restaurants. Visiting a pink beach would be a memorable experience, especially as you can choose from a wide range of experiences. Some of the beaches discussed here are tourist spots, with all the amenities and activities available. However, there are some secluded options where one can get away from the hustle and bustle of city life.