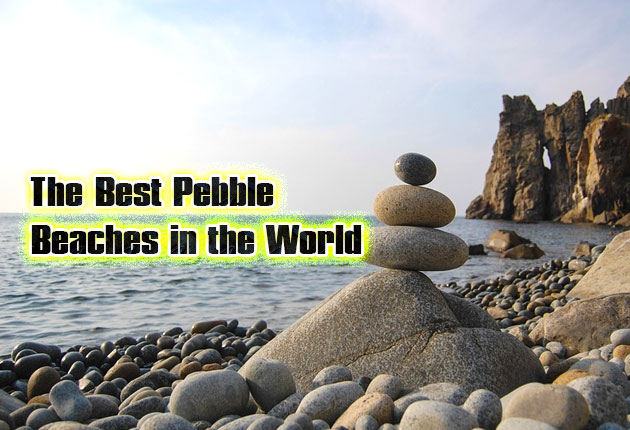 During summer, most people seem to be in search for the perfect white sand beach. But if you hate having sand stuck in your swimwear while sunbathing, or seeing the sand being blown into your sandwich while having a picnic, then pebble beaches are the ideal destination for you. There are many beautiful beaches lined not with fine sand, but with pebbles and cobbles, and even boulders. They may not be the most ideal for swimming, but they have their own unique, fun appeal.

Click more to see the world’s most stunning pebble beaches:

Located in Yaquina Head Outstanding Natural Area on central Oregon coast, the Black Pebble Beach is a fascinating display of round black basalt rocks. The Yaquina Head itself is mostly composed of basalt, a sturdy volcanic rock that has eroded away to form the Newport seashore. If you listen closely to the sound of the waves crashing with the rocks, it sounds like an applauding crowd.

Besides the black pebbled shore, another fascinating thing about this beach is that it unveils the ocean floor during low tide. You can admire the exposed and beautifully colored sea anemones, mussels and sea urchins. Harbor seals also rest on the offshore rocks. The Chesil Beach is an 18-mile long natural wonder located in Dorset, southern England. It isn’t technically a beach, but a tombolo – a thin strip of sand, pebbles or rocks that connect two parts of land together. The famous beach is part of the Jurassic Coast World Heritage Site, that stretches from Portland to West Bay. According to the Chesil Bank and the Fleet Nature Reserve, the Chesil Beach is composed of about 180 million pebbles.

Different types of rocks can be found here such as granite, pumice, flint, quartzite, and others. Fishermen from the area claim that they can identify what part of the beach they are on, especially at night, by just checking the size of the pebbles. Coarser and larger stones are located near the Portland entrance to the beach, while the shingles become smaller towards the West Bay.

Local people drop the word “beach” and call it “The Chesil,” an affectionate moniker to show that there is only one Chesil and this is it. However, this uniquely magnificent beach is not a place for swimming or surfing – just fishing. Originally named as Te Mata Hapuku, Birdlings Flat is a settlement in Canterbury, New Zealand. The beach here has been a favorite spot of hunting rock and gem collectors. Greywacke pebbles make up the most of the beach’s shingles, but other treasures like quartz, agates, Jaspers and even petrified wood can also be found.

Due to strong ocean currents, surfing and swimming at the Birdlings Flat are not advised. You can witness Hector’s dolphins, fur seals, rare whales and other marine animals thriving in the beach’s waters. The Birdlings Flat is also a base for meteorological research by the University of Canterbury. The Pebble Beach in Nice, France stretches along the Mediterranean coast of the French Riviera. It is composed mostly of “les galets,” or smooth stones.

The place is a major tourist destination on the French Riviera and it is crowded, especially on holidays. Visitors are advised to wear sturdy sandals because walking on this stony beach can be uncomfortable. Another tip is to pack up a fold-up mattress or even a fold-up sun bed while lying on the beach. Jasper Beach is an 800-meter long pebble beach located in the west of Howard Cove in Machiasport, Maine. Towards the top of the ridge, the stones are almost or perhaps a little larger than the size of a fist. Closer to the edge of the shore, the pebbles get smaller like the size of a thumb tip.

People thought that the rocks in the beach were mostly composed of the iron-rich, reddish-brown rocks called jasper – hence the name –  but it was discovered that they were actually rhyolite, a volcanic rock with a color similar to Jasper. Geologists from the Maine Geological Survey revealed that only a few of the pebbles are real jasper. Unlike most pebble beaches, the Valugan Boulder Beach is known for its smooth, large rocks lining up the shoreline. It is located on the eastern Coast of Batan in Batanes, Philippines. While the majority of the rocks in the beach are actually boulders, smaller pebbles and shingles can be found towards its southern end.

The boulders are said to have come from Mount Iraya, a nearby active volcano, when it erupted in around 400 A.D. Centuries of relentless, pounding waves from the sea gradually polished the rough volcanic rocks into the smooth boulders we can see today. The Slapton Sands, located in the village of Slapton in Devon England, is perfect for exploring and water sports. It’s also a scenery that comes with a little history lesson. This beach was taken over by the allied forces in 1943 as a rehearsal area for the D-Day Landings during World War II, but unfortunately, 743 American servicemen died during the exercise due to an attack by the Nazis and friendly fire from coordination problems.

There is a stone monument set on the beach to commemorate the ill-fated ‘Operation Tiger,” and the Sherman Tank is positioned at the nearby village Torcross. Aside from that, they can also come to observe the rarest flora and fauna in the UK in the Nature Reserve. The Slapton Sands is a designated as an Area of Outstanding Natural Beauty and is a gorgeous destination at any time of the year. This beautiful white beach situated in Washington Island, Wisconsin, is made up entirely of limestone and enhanced by the luminous waters from Lake Michigan. The beach got its name from a log schoolhouse that used to stand there since 1850 but was replaced by a barbeque area and a picnic table.

The small, smooth limestone rocks were glacier-polished over thousands of years. These are so precious that souvenir hunters used to carry off so many of the rocks until a ban was imposed. Now, there is a steep fine for anyone who would take away even one pebble from the beach.