Watching jellyfish swim is a fascinating experience. They’re beautiful to look at, have a unique swimming method, and even have a mysterious quality about them. While we might have seen many jellyfish in movies, pictures, and reality, these creatures are worth studying further. After all, there are some fossils which show them predating even dinosaurs by about 400 million years. In order to catch you up on the mysteries of jellyfish, here are some interesting facts about them. Some might be common knowledge, but others are quite astonishing.

Jellyfish aren’t really classified as fish, as they have no bones at all. they’re actually in the invertebrates category and consist of around 95 to 98 percent water. 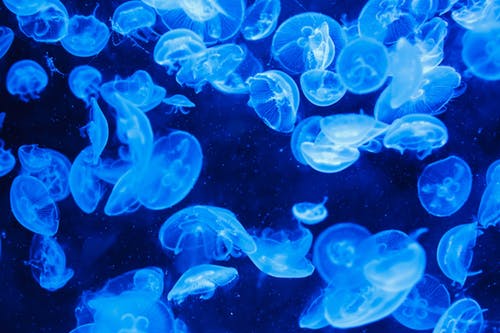 There are several varieties or species of jellyfish. Even though most are lumped into one category, there are several differences between one species and another. For instance, the Aequorea Victoria species has proteins that a fluorescent green in color. These protein are a kind of light source that pinpoints other kinds of proteins if required.

Hence, scientists have now been working on a way in which the Aequorea Victoria proteins can help to track the microscopic activity of tumors that could possibly be cancerous. If this works out as it’s supposed to, we might be able to detect cancer earlier and nip it in the bud.

We usually think of the brain as the crux of all activity in our bodies. The brain is also known as the nerve centre since it controls everything that the nerves feel or experience. Even though the tentacles of jellyfish are essential nerves, they don’t have a brain to control their movements.

Instead, the tops of jellyfish are known as nerve nets. These help the creatures to sense any changes around them. The jellyfish can thus respond and move according to what their tentacles feel.

Along with no brain, jellyfish also have no heart, lungs, face, eyes, ears, or any other major organ. This is quite surprising, as they’re definitely moving about the water on their own. Without a brain or heart to guide them or pump blood around their bodies, it’s fascinating how these invertebrates are still able to survive and navigate in the water.

As mentioned above, most of the jellyfish’s bodies are made up of water. Hence, their bodies are also translucent or even transparent. It’s easy to see that they do not possess any major organs like most other sea creatures.

If the jellyfish have no respiratory, we may wonder how they breathe. Fish also swim underwater, but they have gills while mammals have lungs. Interestingly, jellyfish breathe using a unique system with their body tissues. This thin organ diffuses the oxygen in the water to the jellyfish’s body. Hence, there’s no need for a respiratory system in this case.

Salted caramel is a popular flavor, but very few people might know that jellyfish can actually emulate the same taste. The jellyfish population in Japan is quite large and even invasive in some areas. In order to put the jellyfish to good use, some Japanese high-school students managed to use them in a recipe for salted caramel.

The jellyfish, in this case, is powdered and might add to the complexity of the caramel’s taste. This might sound disgusting to those who aren’t used to experimenting with their food. However, it’s quite a unique and useful manner of controlling the jellyfish population.

The majority of jellyfish species have quite a short lifespan on average. If they’re quite small, their whole life cycle might be over in a few hours.

However, there are actually two life stages when it comes to jellyfish. One is a mobile medusa, and the other is a stationary polyp. The mobile medusa is what we’re most familiar with, where the jellyfish is swimming through the water with its tentacles hanging down most of the time.

Most jellyfish species would move through these life stages in a short period of time. The species Turritopsisnutricula, on the other hand, has the ability to go back to the polyp stage in stressful situations. Instead of dying, it regenerates and lives a new life. It’s thus also known as the ‘immortal jellyfish’.

Some of the most well-known jellyfish are on display at aquariums. One of these is a giant specimen of the Drymonemalarsoni . It’s informally dubbed the ‘Pink Meanie’. This is due to its unique coloring as well as the horrible pain of its sting.

Speaking of the jellyfish’s sting, this could easily be worse than even a bite from a tarantula. This is especially true of the Irukandji species, which are small but quite nasty when provoked. The resulting pain could be a thousand times worse than anything a tarantula can do to you. The resulting symptoms could even be life-threatening to a human. While it’s not usually fatal, the sting can take someone’s life if not attended to properly and at once.

While the Irukandji might be a tiny box jellyfish, there are other versions that have a very long reach. The lion’s mane jellyfish, for instance, might grow tentacles that are more than 90 feet long!

Since the jellyfish population is quite a problem in Japan, we may assume that they’re capable of multiplying quite well their own.  A group of these creatures is known as a bloom, a swarm, or even a smack. In the animated movie Finding Nemo, there are hundreds of jellyfish grouped together, This is quite accurate, as one swarm of jellyfish can have around 100,000 specimens.

Box jellies can actually mate with each other, performing a kind of dance while doing so. This is quite advanced when we consider that the creature has no vital organs or even a brain. However, many other jellyfish species clone themselves as well. For instance, if any human or predator cut a jellyfish in half, the two halves would simply regenerate and become two organisms.

Many might assume that jellyfish are only present in the sea. This isn’t really true, as freshwater jellyfish do exist. However, it’s quite rare to find jellyfish in lakes or rivers that have slow currents. The Craspedacustasowerbii is one such species that lives in the Chinese Yangtze River. It’s also present in several freshwater bodies in almost every American state.

The above facts about jellyfish would certainly fascinate anyone who’s interested in marine biology. While jellyfish might not have sturdy or solid bodies, they’re resilient and magnificent in their own way.