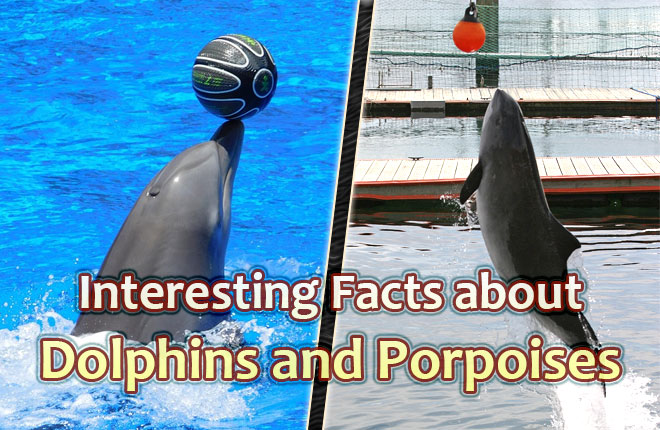 Dolphins and porpoises are no doubt some of the most fascinating sea creatures we can witness in a lifetime. These are related to other magnificent creatures such as the shark and whale, but each has their own unique attributes.

However, dolphins and porpoises are considered much friendlier and are even used for entertainment purposes at times. Some have even ridden on dolphins in water parks or beach resorts. For those who’re interested in sea creatures, finding out more about these two should be a priority. We’ll do just that here: We’ve mentioned above that dolphins and porpoises have a familial connection. However, their physical differences are quite glaring. The first difference is obviously the size, with dolphins being much bigger than porpoises in size, their mouths, and the ‘beaks’ that both possess.

Plus, dolphins have slender, more elongated bodies than porpoises. Both animals also have a dorsal fin, but dolphins have a more curved shape here than the porpoise. The porpoise’s fin is actually more of a triangle.

Dolphins and porpoises also have teeth, but there’s a marked difference here as well. Dolphins have sharp teeth shaped like cones, while porpoises have spade-like, blunt teeth.

Some also know porpoises as ‘toothed whales’. In fact, dolphins, porpoises, orcas, and the sperm whale are all grouped into one category of animals. They’re all called odontocetes, which is the category assigned to any whale with an asymmetrical skull, one blowhole, and rows of teeth.

Odontoceti have a diet of mostly squid, fish, and invertebrates such as jellyfish. These are also assumed to be quite intelligent, with the sperm whale having the largest brain of any creature alive right now. Even dolphins are famed for showing a high level of intelligence when they’re held in captivity.

The growth cycle of porpoises is quite rapid. They reach sexual maturity very fast as compared to the other species of tooth whales. In fact, porpoises have been known to mate and even reproduce at the age of three.

Nearly all porpoises have some sort of tubercles. These are also called bumps, warts, or nodules. One kind of porpoise, known as Dall’s porpoise, don’t have anything like this. The function of the tubercles isn’t exactly known, though biologists suspect it’s to help the animals’ fluid flow.

Dall’s porpoise is also unique in being the fastest among porpoises. It’s also among the fastest cetaceans as a whole. Cetaceans are the kind of aquatic animals that are finned and carnivorous. They include more than seventy species, including the fin whale, the killer whale, and the belugas.

A Dall’s porpoise can swim up to a speed of more than 40 mph, which is very near that of much larger animals. According to some studies, this kind of porpoise might even be faster than orcas at times.

While the dolphin is known for its sleek, almost elegant body, porpoises are different in this regard too. They’re short and very stocky as a rule, even when they’re adults. The longest they’ve been known to grow is around 8 feet. They also don’t have a long rostrum or nose.

Several online sources claim that there are only six distinguishable species of porpoises. However, one reliable source, Marine Mammology, states that there are seven. These are the vaquita, the spectacled porpoise, the Indo-Pacific porpoise, Dall’s porpoise, harbor porpoise, Burmeister’s porpoise, and the narrow-ridged finless porpoise.

As we can gauge from just the names, there are several interesting variations of porpoises all over the world. The latest classified species here is the narrow-ridged finless porpoise, which was previously grouped together with the Indo-Pacific porpoise.

Of all these species, the vaquita is the smallest one. It’s found mainly in the Gulf of California. The maximum length it grows to is 1.5 meters or 4 feet, 9 inches for females. Males can grow up to 1.4 meters, or 4 feet, 6 inches.

Unfortunately, the vaquita porpoise is also among the rarest mammals that live in the ocean. The IUCN has now labeled them as being under threat of extinction. This is mostly due to the illegal gillnet industry, which would probably extinguish the species very soon. Around a year ago, only about 30 vaquitas were left.

Seeing a vaquita is highly unlikely, as they’re also very evasive along with being few in number. They would only come to the water surface to take a breath and then disappear as quickly as possible.

While most porpoises will swim in small groups of 6-10, the vaquita prefers to be alone. They only seem to become more social with each other when calving. Harbor porpoises are similar in this regard, as they’d swim just in pairs or all alone. The colorings of different dolphin species help to differentiate them from one another. The bottlenose dolphin is among the most common of dolphin species, with a dark back and lighter underside. It also has a face that seems to be always smiling. Many porpoises may also share this trait.

Common dolphins might also have a mostly gray color with their undersides being white. The usual length for these is about 6-8 feet, which is much shorter than the bottlenose. However, they’re much more athletic than many other aquatic mammals. They can leap and splash loudly into the water, sometimes being heard from quite some distance.

Dolphins are famed for their docility and friendliness. Perhaps this idea is perpetuated by their portrayal in books and movies. The movie Flipper featured a bottlenose dolphin that made friends with a teenage boy.

However, dolphins are wild animals when all is said and done. Don’t forget that they belong to a carnivorous species and have rows of sharp teeth. They can tear and kill anything if it threatens them. In fact, some dolphins can even take on huge sharks by ramming them with their beaks.

We’ll round off with some strange but interesting dolphin facts. First, dolphins and most whales communicate through echolocation, which means they must have a good sense of hearing. However, dolphins cannot smell at all. They can taste, however, and can even distinguish between salty, sour, sweet, and bitter flavors. T

Some people have observed that dolphins seem to have tears in their eyes. These are secretions that are slippery to the touch. They have the function of washing out the dolphin’s eyes and hence prevent infections. This also serves to reduce the friction between their sensitive eyes and the salty water in the ocean or sea.

The sea has given us many wondrous gifts, with dolphins and porpoises being among the best. We should strive to find out more about them in order to know how to preserve their existence. These gorgeous animals aren’t just for our enjoyment but also a responsibility that we should protect.