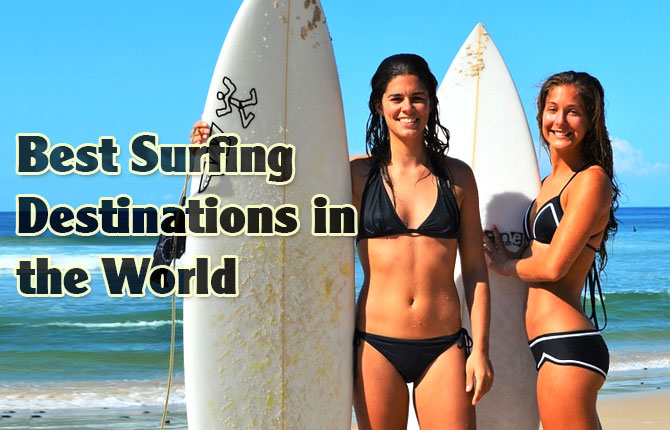 Here are some of the top surfing destination on the planet for the insatiable wave-riders! Black Beach is a perfect destination for advanced surfers, as it boasts the most intense breaks that go with the strong currents, so beginners beware! This is considered one of the best surfing spots in the US mainland. Try not to avoid going there on weekends as it can get quite crowded. Brazil is famous for its beaches, but probably its most famous surfing spot might be in the cosmopolitan state of Santa Catarina. Considered as one of Brazil’s most developed states, Santa Catarina also boasts a lot of great surfing spots such as Joaquin Beach, Campeche, Lagoinha do Leste and Praia Mole. These beaches’ huge and powerful waves never fail to beckon surfers, and their spectacular beauty and fun activities are also a magnet for the rest of the beachgoers as well. One of the surfing spots in Europe, Bundoran Beach in County Donegan, Ireland boasts shimmering blue-green waters and rolling waves that crash into the bluffs and flat rock reefs.  Extreme surfers will definitely enjoy the extra challenge in battling the cold Atlantic waters in addition to the huge waves (average height is ten feet). For the experienced and adventurous surfers who also long for the alluring tropical paradise, Cloud Nine beach in the province of Siargao, Philippines might be the perfect place! The waves are a powerful reef break, crashing into razor-sharp shallow live corals with left and mostly right sides. Don’t surf there if you don’t want to get torn to pieces by the rippling waves and razor-sharp ocean beds. Costa Rica is also known as a playground for surfers. Among the most popular surfing spots, there are the Playa Naranjo, Ollies Point, and the Portero Grande. You will be able to catch the huge rolling waves from April to October, which offer something for every surfer, from beginners to daredevils.

With its natural beauty, El Salvador has been slowly gaining popularity for both beachgoers and surfers. For surfers who don’t want to suffer the hassles of overcrowding, El Salvador should be your next paradise. Among its best surfing spots are El Zonte, Sunzal and La Libertad. You can expect the coastline to produce huge swells from March to October — these waves can get up to over ten feet high! France is not exactly a surfer’s playground compared to other countries, but it is the home of what is called as the “surfing capital of Europe,” the Hossegor. Pro surfers can enjoy riding the high waves that break on the shallow sandy shores. The Atlantic seas produce great swells that are at par with those to Hawaii’s, sans the corals. Hossegor is also known for its luxury homes, hotels and mansions. Lima is a coastal city and capital of Peru, which itself boasts more than 1,500 miles of shoreline. Despite the unappealing pebbled beaches and gray waters, not to mention few surfboard rentals in the area, Peru is still a popular surfing attraction. It offers a variety of waves which are ideal for surfers of any skill level. The influential 1960s surfing documentary film The Endless Summer featured Manu Bay as one of the surfing destinations the filmmakers went to. The waves can rise from one to three meters, and if you’re lucky you’ll be able to ride inside the tube. Mentawai’s position in the Indian Ocean makes it a perfect place for surfing. The islands are exposed to south and southwest waves. From March to April, expect the swells to be smaller but consistent, ideal for beginners. The waves should come out stronger in May through October, and by November the waves may return to being small and consistent again. The southern and northern points of Pagi, Siparo, and Siberut should be your next destination. Oahu, Hawaii is the birthplace of surfing, so we should definitely not forget to include it on this list. The waves in Oahu are really the father of all waves, and they reach as high as six meters! Riding the crest of these huge swells are every self-respecting surfer’s dream and should be the peak of their surfing career. The tropical paradise of Samoa also offers some really awesome surfing. And the waves are big and pretty consistent too, especially during the months of April to October. Favorite waves include the “Special K,” which rises as high as 500 meters, and the “Coconuts” which rises up to 150 meters and crashes over liver corals. Maldives’ beautiful coral islands are also blessed with consistent waves. Some caution though: the rocks can be quite hazardous so it’s best to have an extra protective surfing outfit and gear. The Pasta Point is probably Maldives’ most famous wave, which offers 100 meters of immaculately-formed barrels rolling out to sea. But there’s a big price to pay if you want to ride this majestic wave: you have to stay at the exclusive Dhonveli Beach Resort, which will set you back at US$343 per night. Superbank in Gold Coast, Australia is considered to be one of the world’s finest point breaks. There you will never be short of experiencing high, solid walls and out-of-this-world tubes! The expansive beaches are also an asset as they can accommodate all surfers of any skill level. Also known as “‘J’s Bay” to many surfers, Supertubes is located in the province of East Cape, South Africa, and is deemed to be one of the country’s most popular surfing destinations. The oceans there offer very strong point breaks and long fast tubes. Surfers will have plenty of choices to play: Boneyards, Kitchen Windows, Magna Tubes, Point, Albatross, and of course Supertubes, which is the big daddy of the South African beach waves. You’d never thought Canada as a surfing destination, but in fact, you can catch the waves at Tofino on Vancouver Island. It is a sheltered beach break which offers some good and consistent enough swells ideal for surfing. Waters may feel quite cool yet constant, and in the winter the surf may rise definitely higher and stronger. If you wish to be a seasoned longboarder, you may want to sign up at one of Tofino’s several surfing schools.