To people like us whose lives are modern and convenient (thanks to technology), being stranded on an island for a long time with no supplies, electricity, and the Internet would surely make us insane. We would miss Google because we don’t know how to start fires, build tents, or fend off bears using only primitive materials. This is why stories of real-life castaways never fail to amaze us. They have survived while being alone, disconnected with the world in an uninhabited land, defeated all odds, and overcame deadly obstacles. Known as the “lone woman of the San Nicolas,” Juana Maria survived complete isolation on San Nicolas Island, California, for 18 years. Her Nicoleño tribe had a clash with Russian sea otter hunters in 1835. Their conflict turned bloody, drastically reducing the native population. Missionaries heard the news and decided to evacuate the few remaining survivors, but Juana Maria was left behind when she ran back to the island to find her missing baby. She never found her child. After years, missionaries attempted to find her, but they failed. When rescue attempts to find her stopped, she was forgotten and left to survive on the island in total solitude.

Juana Maria spent the next 18 years fishing with hooks made from seashells, capturing seals and seabirds, and fashioning their feathers and skins to make dresses, and made baskets and bowls from woven grasses.

In 1853, a sea otter hunter named George Nidever found her on the island. She was taken to Santa Barbara a few weeks later. She was reportedly fascinated with everything that surrounded her on the mainland, but nobody understood her language. Nidever brought her home to live with his wife, but after just seven weeks, she contracted dysentery and died. Before her death, the Lone Woman was baptized with the name Juana Maria. Her story was later fictionalized in a children’s novel Island of the Blue Dolphins. The story of Scottish mariner Alexander Selkirk was the inspiration behind Daniel Defoe’s Robinson Crusoe and Gulliver’s Travels. He was a sailor on the ship named St. George and was serving under Captain Thomas Stradling. Their crew had spent the previous year harassing Spanish shipping around South America.

In 1704, the ship stopped mid-expedition in one of the islands from the Juan Fernandez archipelago to get more supplies. Selkirk expressed his concern about the security of the ship considering the additional weight it was going to carry. He believed the ship was not seaworthy enough to survive another voyage and said he’d rather be left on the island. He also claimed that the captain wasn’t leading well. The captain, probably relieved that his critic was opting out voluntarily from the ship, left him alone in the island with a few supplies: some clothes, some tools, a musket, tobacco, run and a Bible.

Crusoe was expecting that another ship would be by soon, but he was wrong. He would eventually spend four years and four months on the island alone because the ships that showed up flew the Spanish flag. He turned out to be a survivor with impressive skills. While on the island, he chased and ate feral goats, and munched on wild turnips. He also built a couple of huts made of pimento trees for himself and passed the time notching the days and months on a tree and reading his Bible.

Finally, in 1709, a privateering ship led by Captain Woodes Rogers stopped at the island and rescued him. His story became a sensation and he went on to continue his life as a sailor. 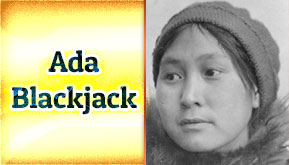 Ada Blackjack, an Inuit woman, accompanied a group of four men on their mission to claim the Wrangel Island north of Siberia for Canada in 1921. She was hired as a cook and a seamstress and was paid 50 dollars a month. She needed the money for her son who was suffering from tuberculosis.

Unfortunately, the team was inadequately prepared for what’s about to happen. Rations ran out and they were unable to hunt enough game to survive. To add to their unfortunate situation, one man named Lorne Knight became severely ill with scurvy. Three of the men attempted to cross the frozen sea to ask for help and more food, leaving Ada with ailing Knight. After a couple of months, Knight died and the three men never came back.

Ada, meanwhile, was able to fend for herself. She learned to set up traps to capture small wild animals and managed to kill birds, seals, and even polar bears. On 1923, she was rescued by a former colleague. With the money she earned and saved, she then took her son to Seattle to cure his tuberculosis.

The story of her survival widely circulated through the media and newspapers dubbed her as the real “female Robinson Crusoe.” But she didn’t like all that attention and chose to live a quiet life back in the Arctic. She lived until the age of 85.

A 16th-century French noblewoman, Marguerite de la Rocque, accompanied a relative in a voyage to the New World in 1542. During the long crossing of the Atlantic, she sparked a scandal in the ship as when it was found out that she was sleeping with a man while she was unmarried and just 19 years young. Her relative, apparently taking the moral high ground, booted both of them off the ship, along with her maidservant. The three of them were marooned on the remote “Isle of Demons,” which is now known as the Harrington Island near the Gulf of Saint Lawrence.

They built a small hut to protect themselves against the blistering cold and used rocks and long guns to scare off wild animals. They had another problem when Marguerite discovered she was pregnant. Amazingly, she survived the birth of the baby, but months after, her child also died due to malnutrition. Her lover and servant also passed away, but she continued to survive alone by hunting wild animals and living in a cave. Around two years after they were booted out of the boat, she was rescued by Basque fishermen and was ferried back to Europe.

Her story was told to the Queen of Navarre, and ultimately, she settled in Nontron, France, and became a schoolmistress. The famous explorer Ernest Shackleton and his 28-man crew left England aboard a ship Endurance, as he launched the Imperial Trans-Antarctic Expedition in 1914. During the expedition, the ship got trapped in ice and Shackleton, together with his crew, camped in the Elephant Island in Antarctica for five months.

To ask for help to rescue the whole team, Shackleton and five of his men set out on a 17-day journey through 1,300 kilometers of ocean, sailing across the world’s worst seas to South Georgia Island while aboard three small lifeboats.  They landed on an uninhabited part of the island so they decided to cross 26 miles of treacherous mountains and glaciers, where they finally reached a whaling station.

Shackleton and his men made the trek alive. With the help of the Chilean navy and its government, Shackleton safely returned to rescue the others left on Elephant Island. Amazingly, not one member of his crew was lost, but for some of them, their toes went missing from frostbites. In 1722, a sailor named Philip Ashton was captured by a band of pirates led by the notorious Edward Low while fishing near the coast in Nova Scotia. When Ashton refused to join them, he was kept as a slave for nine months. He finally managed to escape when the Buccaneers landed at Roatan Island in the Bay Island of Honduras by sprinting into the jungle.

Because he escaped with nothing but just the clothes he was wearing, Ashton ate only fruit for a time. He had no weapons and was unable to kill animals and go fishing. Lucky for him, another castaway happened to be on the island. They became great friends for three days until the unnamed man went out for food and never came back. The man, however, left behind a set of knives, and a stash of gunpowder and tobacco. Ashton used it to start killing tortoises and crayfish and cooking them. He spent another seven months enduring extreme heat, hunger, snakes, insects, alligators. a near-deadly fever, and even an attack by the Spanish before he was eventually rescued by a ship from New England in 1724.

Later on, Ashton wrote a book about his terrifying experience in the company of Low’s pirates and his 16-month stint as a castaway.

Most people who were stranded on islands for so long want nothing more than to get in touch with civilization again. But a New Zealander named Thomas Francis Neale is different. He wanted nothing more than an island all to himself. In 1952, a boat passing by Suwarrow Island in the South Pacific agreed to drop him off there along with two cats and supplies like water tanks, a hut and some books.

The people who had lived on the island before World War II had left behind wild pigs and chickens, and a damaged boat. Because the pigs were destroying vegetation, he hunted them over several months. He also domesticated the chickens, planted a garden and repaired the boat.

Neale lived a happy island life until 1954 when he had a serious back injury that paralyzed him for 4 days. Fortunately, a couple discovered him on a yacht and nursed him back to health. Even though he had a wife and kids, he returned to Suwarrow in 1960 with enough provisions to last for three and a half years. When pearl divers began to invade the island in 1964, he finally left.

His final stay on the island lasted ten years from 1967 to 1977. That year, he was again found by a yacht. He was diagnosed with stomach cancer when he was taken to Rarotonga. He died eight months later.